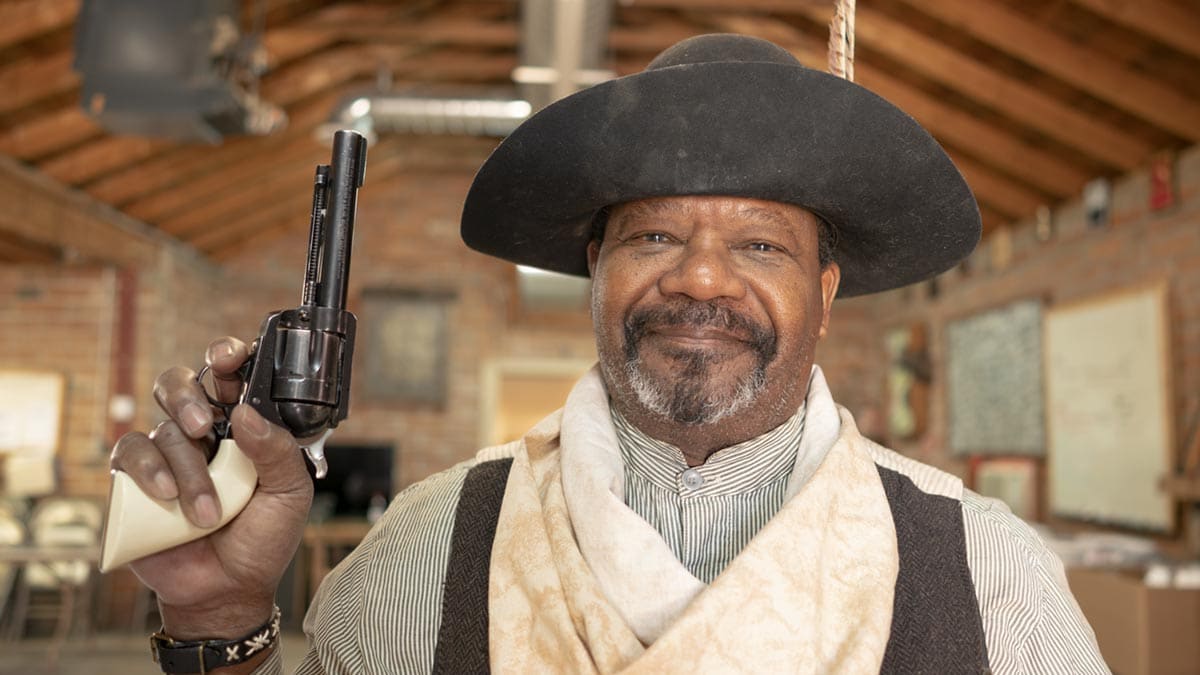 Despite growing up in the Bronx, Oliver Smith craved the life of a cowboy at a young age. When he couldn't afford a horse, he bought a Harley instead. He now lives in Arizona and absolutely loves it.

Guns.com met up with Smith, who goes by the name "Buck," at the Tombstone Vigilante clubhouse in Tombstone, Arizona at the end of March 2021. The Vigilantes are a volunteer group that runs free re-enactments on Allen Street in Tombstone every second and fourth Sunday of the month. Their goal is to entertain visitors, raise money for charities, and to re-create the old history of the town.

BOUGHT A HARLEY INSTEAD OF A HORSE

Having a desire for the open country, Buck left the Bronx many years ago and headed west. He moved to Las Vegas, where he met his wife who has sadly since passed. Every chance he got, he rode horses and played cowboy. Because he couldn't afford a horse, he bought a Harley Davidson instead.

One day his wife asked him if he'd ever been to Tombstone. "What's that?" Buck asked. She told him it was a Western town in Arizona with a rich cowboy history.

Not long after that, Buck found himself in Tombstone, and he happened upon the Vigilantes performing on Allen Street. He enjoyed it so much that he went up to the director and asked, "Can you use me?" The director said, "What are you doing today?"

The rest is history.

Buck has been volunteering with the group for the last four years and loves it. "When I first arrived, I wanted to be Roy Rogers," he said. But the group got him dressed more appropriately for the 1880s. He was able to purchase a Ruger Vaquero off one of the other members. "Believe it or not, but this is the first and only gun that I've ever had in my life. But this gun I do love," he said.

The previous owner had the action and hammer modified so that it could be "fanned". This means you can hold down the trigger and work the hammer with the palm of your other hand to fire fast consecutive shots.

AN ESTIMATED 25% OF COWBOYS WERE BLACK AND HISPANIC

Buck is also unique in the sense that he's the only black member of the Vigilantes. "Anybody that knows history, there was a lot of black cowboys," said Buck. "They ran from slavery from the South. They went west. They rode on cattle drives. And history will tell you, back then, when we were on cattle drives, we got paid the same thing as the white cowboys."

According to estimates, black and Hispanic cowboys made up at least 25 percent of the American West.

Buck's daughter Kristin would love for him to return to New York City, but when he visits her, he's overwhelmed by the hustle and bustle of the big city. His neck gets sore from looking up at all the tall buildings.

"But when I get back to Arizona, I'm like ahhhh," he said, dropping his shoulders and relaxing with a smile. "One thing I miss about New York: a good pizza."