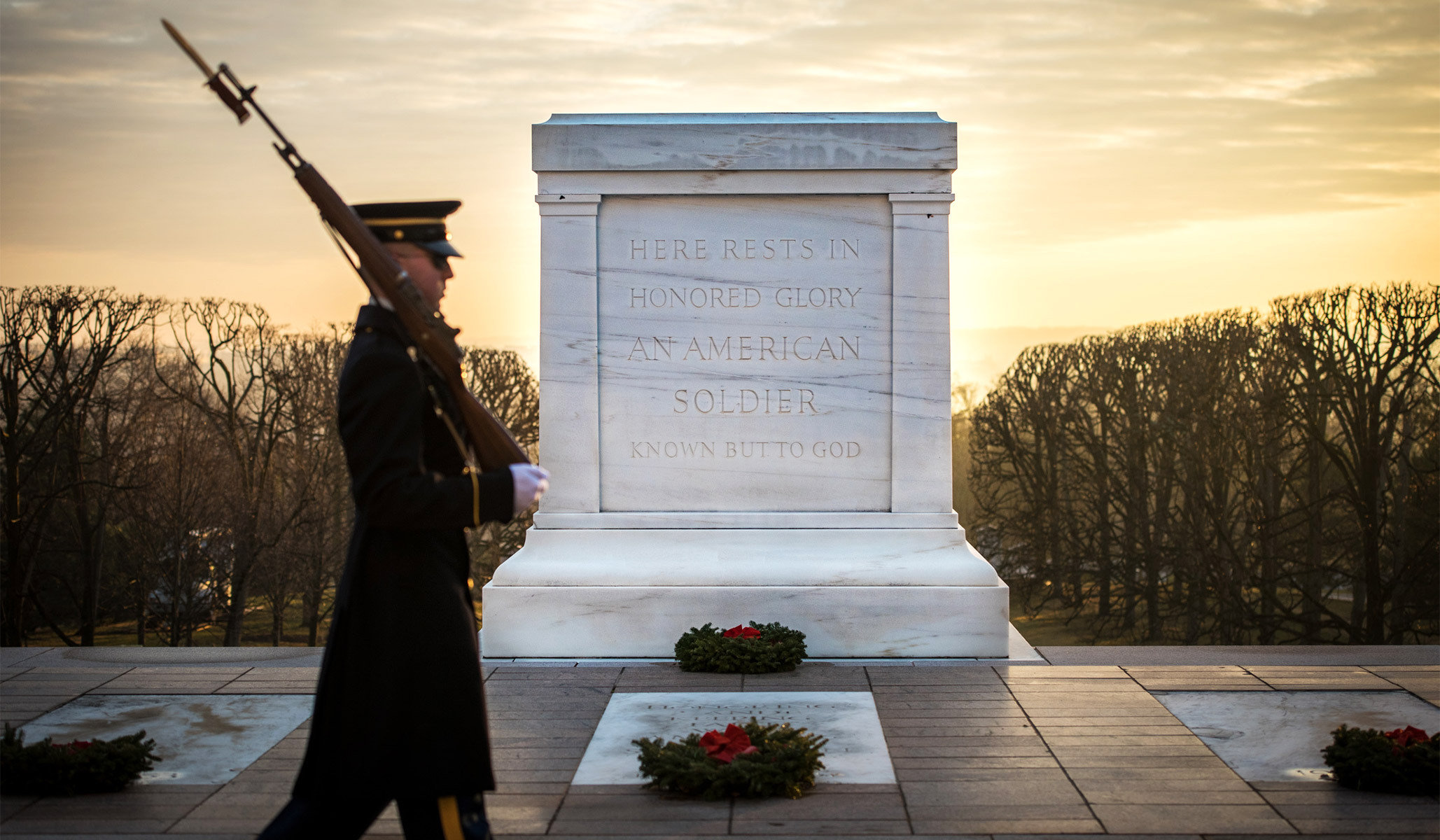 On November 11, 1921, the Tomb of the Unknown Soldier at Arlington National Cemetery was installed as a solemn final resting place for one of America’s unidentified service members.

The mortal remains of that initial Soldier, whose identity was only "Known but to God," was selected from unknown Americans who gave up their lives in France during the Great War. Over 38,000 Americans were buried in French soil at military cemeteries in the Meuse-Argonne, St. Mihiel, Somme, and Aisne-Marne regions following the U.S. involvement in the "War to End All Wars." One set of unidentified remains were selected from each cemetery for review.

From those four sets of identical flag-draped caskets, a decorated GI who had served in the conflict and had been twice wounded, Sgt. Edward F. Younger, selected one to become the Unknown Soldier by resting a bouquet of white roses on its cover. The Unknown was then taken to the port of Le Harve under a ceremonial escort provided by French and American troops and attended by thousands of locals along the way.

André Maginot, the French Minister of Pensions, presented the French Legion of Honor – the country's highest order of merit – to the Unknown Soldier. 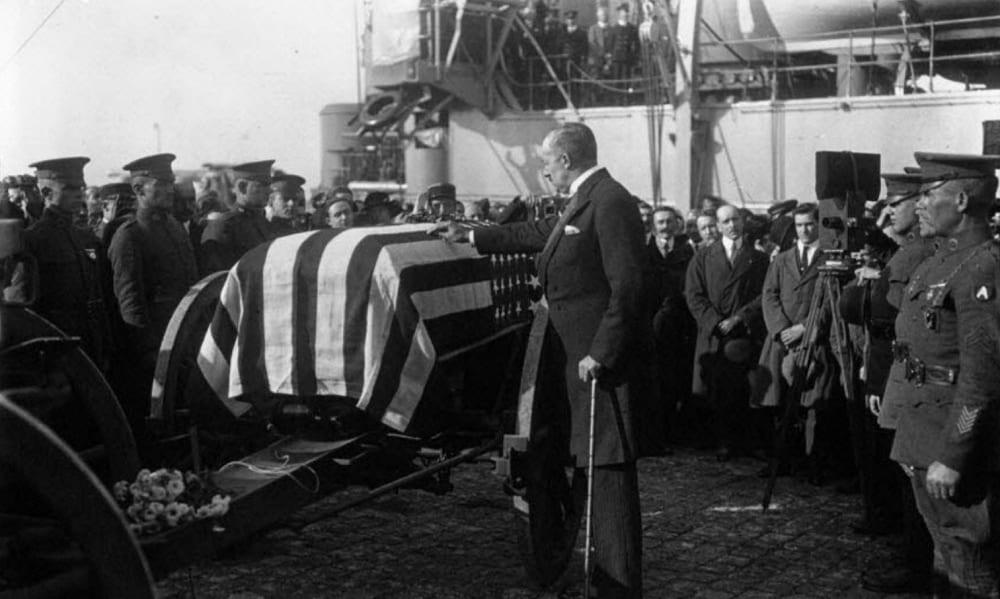 The casket was carried aboard the cruiser USS Olympia on Oct. 25, 1921, by Sailors and Marines while the warship’s band played both the American and French national anthems as well as Chopin’s “Funeral March.”

Installed on the cruiser's deck, the Unknown was guarded by Marines and Sailors for the voyage across the Atlantic to the Washington Navy Yard, where its Olympia arrived on Nov. 9.

Once in Washington, the remains were transferred to the escort of the Army.

After laying in state at the Capitol Rotunda for two days and being visited by 90,000 people, the casket was transported to Arlington on Armistice Day, celebrating the end of the Great War that had occurred three years prior on the 11th hour of the 11th day of the 11th month of 1918.

The procession from the Capitol to Arlington included several military units to include representatives from nine allied nations as well as nurses who served in France, while Gen. John Pershing, who commanded the American forces in Europe during the war, walked behind the funeral caisson.

Honors rendered that day included the presentation of the Medal of Honor by President Harding. Four military chaplains to include a rabbi participated in the funeral service. A national two-minute silence augmented the thousands in attendance. Flowers and wreaths were massed while salutes were fired. Pershing deposited some soil from France into the tomb. The chief of the Crow Nation rested his coup stick across the tomb as a tribute to the fallen and presented his war bonnet.

Today, Armistice Day is known as Veterans Day and the Tomb has had other Unknowns interred to include the World War II and Korean War Unknowns in 1958 and 1984, respectively. Guarded originally by details from nearby Fort Myer and, since 1948, by an elite group of Sentinels provided by the 3rd Infantry Regiment “The Old Guard,” the Tomb has been reverently secured 24 hours a day, 365 days a year, no matter the weather.

In honoring the 100th anniversary of the interment of the WWI Unknown Soldier, for the first time in a century, the public has been allowed entrance to the normally off-limits Tomb of the Unknown Soldier Plaza for two days this week to place flowers near the memorial.

On Veterans Day, Nov. 11, the public is invited to observe a joint full-honors procession, meant to replicate elements of the World War I Unknown Soldier’s 1921 funeral procession. Following this, there will be a combined services flyover of the cemetery and the National Mall in conjunction with the Armed Forces Full Honors Wreath Ceremony to honor the Unknowns and the centennial of the Tomb, set, appropriately, for 11 a.m.

For more information on the Tomb, here is a tour of the display room in the Tomb of the Unknown Soldier Exhibit at Arlington National Cemetery.