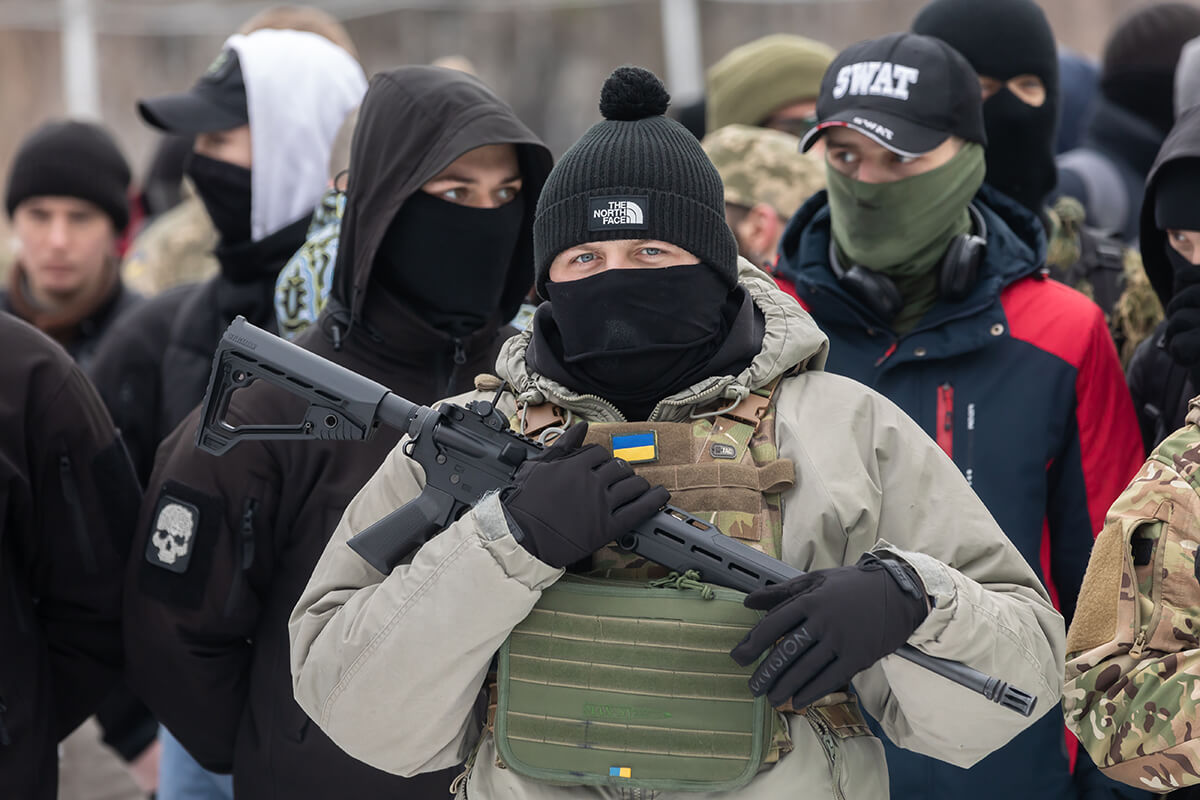 “We are in a queue where people are waiting to get their weapons to fight the Russian invaders,” 21-year-old computer programmer Hlib Bondarenko told an interviewer in a The New York Times video of a Kyiv distribution point for arming citizens. “There is no reason to believe that they are going to stop anytime soon, and their objective, clearly, at least to me, seems to be the occupation of my entire country and the destruction of everything that I love.

“I’m just a regular civilian, I have basically nothing to do with war, or any other thing like it, and I really wouldn’t want to participate in anything like this but I don’t really have any choice because this is my home,” he explained.

What a difference a few days make, and not just in terms of a sea change in the Ukrainian government’s acceptance of the right of the people to keep and bear arms to where they are passing out weapons from the backs of trucks. That wasn’t the case earlier in the week.

Ukraine’s Verkhovna Rada (legislature) had been working on legislation to relax some of the country’s “restrictive” (per the University of Sydney’s GunPolicy.org) gun laws, which essentially prohibit private ownership of handguns and carrying guns when not engaged in authorized activities, and President Volodymyr Zelenskyy was still dithering about the legislation being “premature.” Nothing like a foreign invader with nuclear capabilities and a hunger to swallow you up to give a man religion...

The other sea change is in the media, starting with The Times, “famous” for fielding “Stalin’s apologist” Walter Duranty, who covered up the engineered Holodomor terror famine genocide in which millions of Ukrainians were starved to death. To see a newspaper that has published editorials calling for the repeal of the Second Amendment now giving sympathetic press to civilians being armed en masse is unprecedented. It sets the narrative tone for other news outlets, which we now see praising what’s happening half a world away and not admitting the disconnect with continuing to demand disarmament here.

“Elevating” the about-face to gaslighting status are Occupy Democrats, now praising the arming of civilians on Twitter while ignoring they had previously called for banning AR-15s. Pointing out the cognitive dissonance resulted in ridiculing replies from fellow travelers saying that’s not the same as arming in response to invasion. Thinking themselves clever, they don’t realize how ignorant they are of the deterrent effect an already armed and trained citizenry could have on persuading a plunderer to reconsider altogether. Once again, “gun control” is costing lives.

Speaking of social media, the gun prohibition groups are still being awful quiet about arming civilians with “weapons of war.” At this writing, Everytown, Moms Demand Action, Giffords and Brady Twitter accounts are talking about exploiting the anniversary of Trayvon Martin’s death, “ghost guns,” Joe Biden’s Supreme Court nominee, and everything but what’s going on in Ukraine, probably because everything they stand for and demand to be imposed on their countrymen is being exposed by unfolding reality as destructive to the security of a free State. 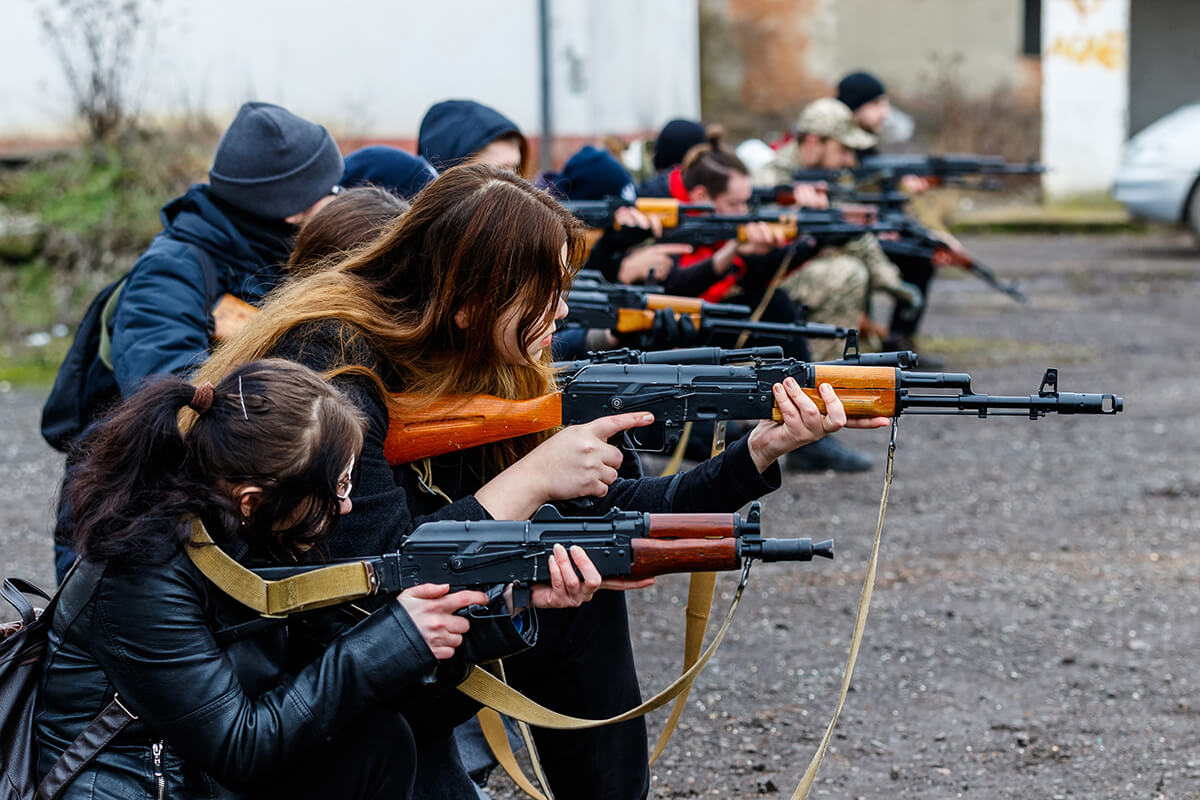 Meanwhile, back in reality, while the West can’t agree on economic sanctions and “the Biden administration is carefully examining legal questions about whether the United States can provide certain weapons and intelligence,” both Putin and the Ukrainians have crossed a line that will define their futures. Now that he’s figuratively crossed the Rubicon, he’s riding the tiger—he has to ride to the end, whatever that looks like.

There’s a difference between taking and keeping, and armed Ukrainians fighting for their country and their lives promise to put up quite the “insurgency.” Unless things devolve literally into World War Three, it’s doubtful he’ll dare use monstrous tactics from the last one like executing villagers to get them to give up the partisans.

And for their part, now that they’re armed and have experienced firsthand what is needed to fight tyranny, don’t look for soon-to-be battle-hardened Ukrainians to give up their guns the next time peace pokes through the war clouds. Scripps News reports “Ukraine disperses at least 18,000 (other reports are upping that number considerably) machine guns to volunteers to fight against Russia,” and from the scenario related above showing weapons being distributed off of trucks, it’s doubtful the defenders are making records-keeping a priority.

This could be a wake-up call for other European countries, particularly those feeling vulnerable to expansion of operations as Putin seeks to draw other “breakaway republics” away from the NATO states and back into the Kremlin’s sphere of influence. As more death, savagery and destruction is revealed, they’ll be able to see for themselves that waiting until the 11th hour serves the interests of the aggressor, whereas, recalling Thomas Paine, “Arms discourage and keep the invader and plunderer in awe, and preserve order in the world as well as property...”

It would be nice to think so, and to be able to predict an RKBA Renaissance in Europe and in the U.S., but one thing humankind historically excels at is not learning a damn thing from the lessons of the past. As restrictive as Ukrainian gun laws have been, the fact that citizens jumping through the hoops could still own semiautomatic rifles with full capacity magazines gave it an advantage over seven states (California, Connecticut, Hawaii, Maryland, Massachusetts, New Jersey, New York) and the District of Columbia in the land of the Second Amendment.

Even a supposed friend of gun owners, like NRA A-rated Marco Rubio, is on record declaring himself open to magazine capacity limits and raising the age to buy a rifle (whereas Ukraine has forbidden 18-year-olds to leave the country and is arming and recruiting them to fight). So, it’s curious he chose to “retweet” and amplify a Twitter post from former COO of Ring (a tech company purchased by Amazon) and Ukrainian politician Kira Rudik asserting “I learn to use #Kalashnikov and prepare to bear arms. It sounds surreal as just a few days ago it would never come to my mind. Our #women will protect our soil the same way as our #men. Go #Ukraine!”

Perhaps Marco should be asked if he’s reconsidering.

And even now, while a Ukrainian brewery is closing down its bottling operation to make “ Molotov cocktails” for distribution to the growing citizen militia, it’s hard not to think of 18 USC § 232(5): “ The term ‘explosive or incendiary device’ means ... (C) any incendiary bomb or grenade, fire bomb, or similar device, including any device which (i) consists of or includes a breakable container including a flammable liquid or compound, and a wick composed of any material which, when ignited, is capable of igniting such flammable liquid or compound, and (ii) can be carried or thrown by one individual acting alone.”

If Zelenskyy has his way, it won’t just be Ukrainians picking up machine guns and Molotovs and joining in the resistance against the invaders.

"Everyone who wants to join the defense of security in Europe and the world may come and stand shoulder to shoulder with Ukrainians against the invaders of the 21 Century," he declared, inviting allies who see their own stake in keeping his country from falling to assist. And that has not gone without strong objection in some quarters.

"We say no to tasking the Nato alliance - but now endorse UK civilians, with no military training, to go and fight in Ukraine!" “conservative” member of Parliament and chair of the defense committee Tobias Ellwood tweeted in response. "Please do not go if you have no combat experience. You may get yourself and others who have to look after you, killed."

Labour is no better, with MP Clive Lewis asserting “Untrained people going to a country where they can't even read a road sign would be a liability. They'll get themselves killed, they'll get other people killed."

It’s the “Only Ones” mentality writ large (recalling the unintentionally hilarious video of a DEA agent giving schoolchildren a gun safety talk in which he declared himself the “only one in this room professional enough” to carry a gun and then proceeded to shoot himself in the leg). Using that rationale, no untrained Ukrainian citizens should volunteer, either (and if that’s the rule to be guided by, neither should have the Patriots at Lexington and Concord).

There will no doubt be losses among all defenders, but already reports back from the field show some of the new ones acquitting themselves admirably against Putin’s “better trained” shock troops.

There’s an illustrative video posted on Twitter showing armed Ukrainian citizens in street clothes identified as “territorial defense” unloading a captured Russian military truck, now bearing a broken windshield and several spray-painted “Zs” ( designating it as deployed by “Eastern forces.”) The young, uniformed Russian soldier, with both hands on his helmet in surrender, humiliation, and fear, separated from his comrades and at the mercy of his captors, is just a kid.

"We have hundreds of POWs, we are issuing videos, showing Russians coming to Ukraine," reports 26-year-old Sviatoslav Yurash, the nation’s youngest MP who has armed himself with an AK-type rifle. “Everything is at stake, I'm no soldier, I don't have much experience with the gun. When you are fighting for your life, you learn very quick. The reality is Ukraine doesn’t have a choice.”

Taking away choices from people who would be free is a specialty of those who would rule, and the unfolding situation with armed citizens fighting tyranny presents an unprecedented opportunity to “monkey-wrench” our domestic violence monopolists. What our “gun rights organizations” and those Republicans who claim to be worthy of gun owner support need to do now is take the example of Ukraine and run with it. They should point out how the gun prohibitionist groups are avoiding the issue altogether because, despite having the finest Madison Avenue manipulators money can buy, they can think of no counterargument that will stick.

We who believe in the right of the people to keep and bear arms must forcefully drive home the point whenever the opportunity arises to call attention to one indisputable fact that is being borne out before the eyes of the world: When you get down to basics, an armed citizenry with the equipment and the will to fight is a requisite for security and freedom, as much as those who would disarm us think the answer is to troll Russian soldiers on Tinder.

David Codrea is the winner of multiple journalist awards for investigating/defending the RKBA and a long-time gun owner rights advocate who defiantly challenges the folly of citizen disarmament. In addition to being a regular featured contributor for Firearms News he blogs at “The War on Guns: Notes from the Resistance,” and posts on Twitter: @dcodrea and Facebook.