California – -(AmmoLand.com)- Last week, Representative Eric Swalwell, who has in the past proposed an Australia-style “buyback” of certain firearms and who threatened to nuke gun owners who wouldn’t turn in their guns, claimed on Twitter that the NRA threatened Speaker Nancy Pelosi. Well, that was a lie and one that was quickly shot down in the wake of his tweet.

But Swalwell’s doubled down on his smears and lies, claiming the NRA is taking Russian money. I guess he’s decided that if he tweets lies that are outrageous enough often enough that they will be seen as the truth. In any case, Second Amendment supporters need to view this increasingly escalating pattern with a great deal of concern. 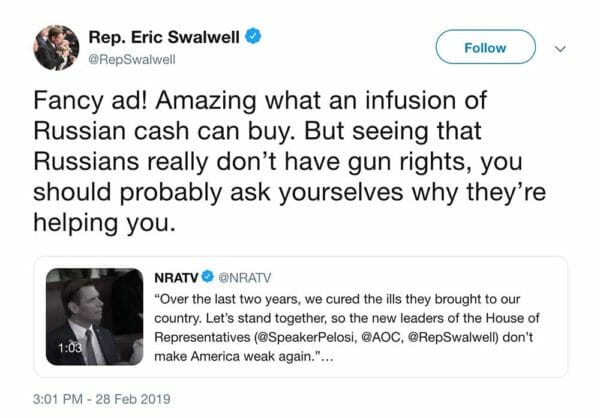 Say this for Bloomberg and other anti-Second Amendment extremists: They’ve learned from what happened two decades ago. In 1999, after the defeat of legislation that would have balanced background checks and the survival of gun shows in the House of Representatives, then-Representative Barney Frank, no friend of the Second Amendment was famously quoted by the Washington Post as saying, “They don't have marches, they don't have demonstrations, they don't shoot their guns in the air. It's just good, straight democracy.”

Frank’s comments, as well as those of then-House Minority Leader Richard Gephardt, caused a serious problem for those seeking to strip away our Second Amendment rights. Despite the fact that they supported stripping away the Second Amendment rights of Americans, Frank and Gephardt made Second Amendment supporters seem like reasonable people who were simply involved in the Democratic process. As such, people were less willing to be motivated to fight against them.

Between that and the Heller and McDonald cases, anti-Second Amendment extremists like Michael Bloomberg were soon in a serious bind. The Second Amendment had been held by the Supreme Court to be an individual right, and many people were viewing Second Amendment supporters as normal people who were raising valid concerns. This made it hard to really motivate people to go after Second Amendment rights, even after shootings like those at Fort Hood or Tucson.

They got their chance after Sandy Hook. After the grassroots efforts by Second Amendment supporters helped the NRA block a permanent federal semi-auto ban along with other anti-Second Amendment measures, the gloves finally came off. Anti-Second Amendment extremists thought they had such things in the bag… and were proven wrong. To say they were enraged puts it mildly.

Since then, Bloomberg’s groups like Moms Demand Action and other anti-Second Amendment organizations have settled on a strategy of dehumanization. Major “mainstream” media outlets have gone along with this strategy.

What did that mean? Well, once you have dehumanized someone or a group of people, it’s easier to mobilize people who see themselves as normal to act against them. It began after Sandy Hook, and since Parkland, it has gone into high gear, with both a social stigmatization effort, censorship by Silicon Valley, and an assault via corporate boardrooms being used in addition to a legislative push.

By painting the NRA as monsters, they forced companies to end affiliate programs. NRA members hardly ever used them (they didn’t join the NRA to get cheaper shipping from FedEx), but those programs were important in that they reaffirmed that those who were defending the Second Amendment weren’t monsters.

So far, that strategy is bringing some returns for anti-Second Amendment extremists. We have to accept that Swalwell will be smearing Second Amendment supporters for a while. Fortunately, the combination of his extremism and the fact he spouts off lies that have been relatively easy to disprove limits that effectiveness.