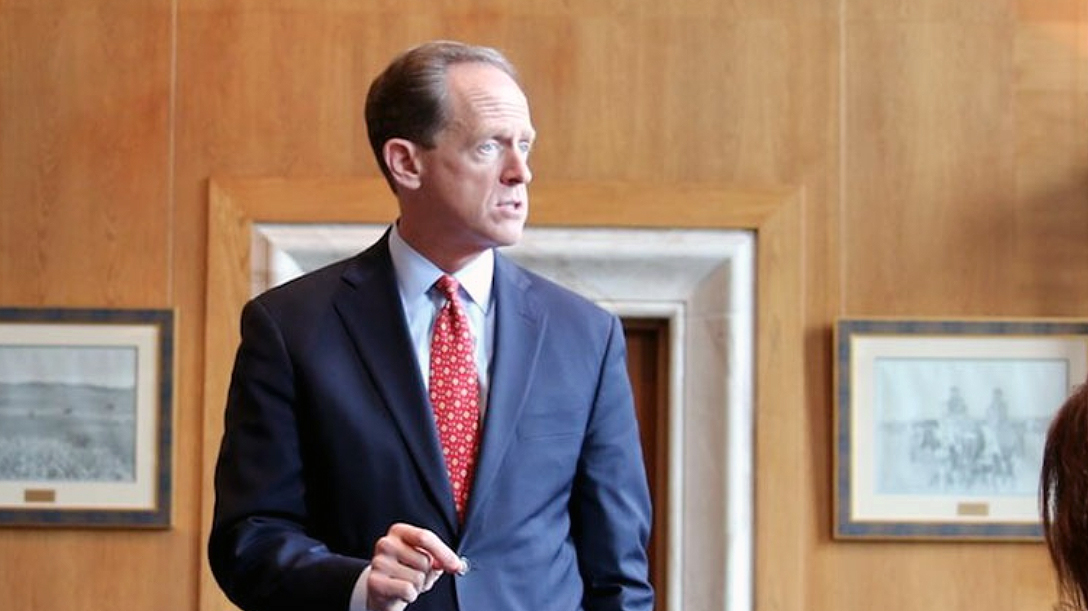 U.S. Sen. Pat Toomey went on record Thursday to say he would be a "no" in the expected razor-thin vote on gun control hype man, David Chipman, to lead the ATF.

The Pennsylvania Republican in 2013 spearheaded a push to expand background checks nationwide to include virtually all private sales. That effort saw a narrow defeat and fueled a successful campaign to unseat moderate congressional incumbents that supported its passage. The bill and Toomey's repeated circle back to possibilities of rebooting the same proposal earned him a poor rating from pro-gun groups when he ran for re-election in 2016.

However, supporters from the other side of the argument, namely former U.S. Rep. Gabrielle Giffords and her husband, now U.S. Senator Mark Kelly, strongly endorsed Toomey in his bid for a third term while former New York Mayor Michael Bloomberg chipped in $1.15 million to support the Republican's campaign.

All of which surely makes it bittersweet this week for those past supporters when Toomey announced he would not back controversial Gifford's advisor David Chipman's nomination to head the country's federal gun regulatory agency.

“Meaningful progress on gun safety will only be possible when members of Congress and the executive branch drop the politics and hyperbole and focus on the possible. That likely will not happen if the ATF—the law enforcement agency tasked with enforcing the nation’s firearm laws—cannot be impartial in carrying out its duties. While I respect David Chipman’s nearly 25 years of experience as an ATF agent, I fear that his subsequent vocal support for policies that limit the rights of law-abiding gun owners and his past criticisms of those in the firearm industry would compromise his ability to carry out ATF’s mission effectively. As such, I am unable to support his nomination to lead the ATF.”

The National Shooting Sports Foundation, the trade association for the firearm and ammunition industry, called Toomey's announcement "bold and decisive," going on to hold that the ATF should not be a political tool of gun control special interests.

"David Chipman’s nomination is clearly a move to politicize the ATF," said Larry Keane, NSSF's senior vice president and general counsel. "Confirming a gun control lobbyist as director would not only do irreversible damage to ATF’s mission but it would also harm the cooperative relationship between our industry members and ATF."

The NSSF, as well as sportsmen’s and conservation groups as diverse as the Boone & Crockett Club and Ducks Unlimited, strongly oppose Chipman as the second director in ATF's history. Nominated by the Biden-Harris administration earlier this year, he deadlocked the Senate Judiciary Committee in a split 11-11 vote after a tense hearing in which he was grilled by lawmakers on his feelings about gun bans and increased federal regulations of currently-lawful firearms.