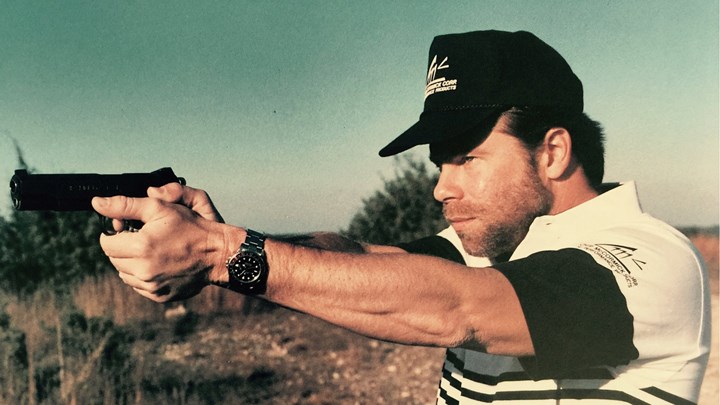 Hailing from the Austin area, McCormick's grandfather, Capt. J. W. McCormick, was a Texas Ranger in the 1920s-1930s and, as noted by the Texas Ranger Museum, "helped clean up the east Texas town of San Augustine."

One of the top pistol masters in the golden era of practical competition shooting, McCormick set the pace. In 1985, using a Scepter Custom Auto-Ordnance Thompson M1911 in .38 Super, he set a new world record in a Steel Challenge Match with a time of 6.47 seconds for four runs.

"To give you an idea of just how fast Chip can shoot, bear in mind that 6.47 seconds averages out to 1.62 seconds to draw and fire three rounds on each of his four runs at the steel," pointed out American Handgunner at the time.

In a 1987 interview, while still very active on the Bianchi Cup circuit, McCormick spoke about his approach to shooting and lessons he learned both from becoming proficient in golf and mechanics he used in everyday life, then translated those to natural shooting movements. All lessons that hold up decades later.

He went on to form Chip McCormick Custom, or CMC, creating the concept of the "modular 1911" as well as his famous "Shooting Star" magazines, which are often used today as factory OEM by 1911-makers.

McCormick also left another mark on the firearms industry by pioneering the drop-in AR-15 trigger.

As detailed by Bill Loeb at Shooting Illustrated:

Before CMC (Chip McCormick Custom), there was no such thing as the now ubiquitous drop-in AR-15 trigger. Gunsmiths would put together a trigger with parts, often from a kit. McCormick created a single-unit trigger that installs in minutes; literally a "drop in." Of course, easy installation was not good enough for McCormick, he made it crisp, clean, with no creep.... Match grade. Now dozens of imitators crowd the market, the market created by Chip McCormick.

His passing was noted by many across the industry, from today's Wilson Combat-owned CM Products to Kimber and others.

"Chip was an amazing competitor, inventor, and family man," noted USPSA Triple Crown Winner Todd Jarrett last week on social media. "If you head to the range over the weekend and you have a McCormick (CMC) product, make some noise that’s what he would want."

In lieu of flowers, the family has asked that donations be made to the Texas Ranger Hall of Fame and Museum Memorial Fund, an institution he was a key patron of.