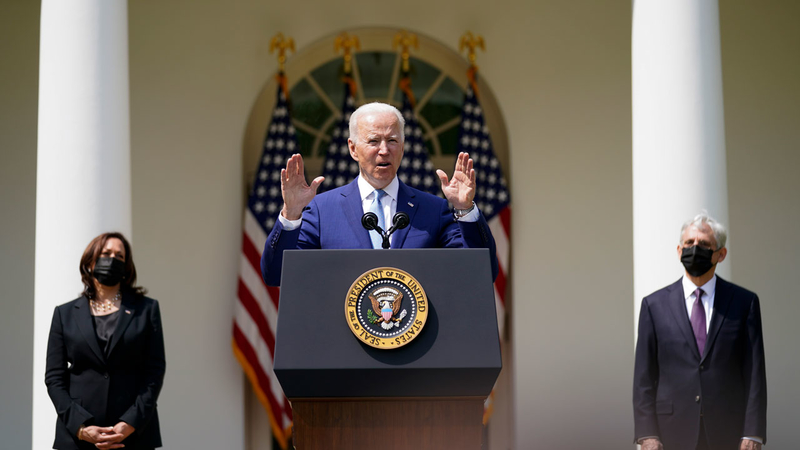 The Biden-Harris Administration announced a series of actions directed by the White House that would affect millions of lawful gun owners. They haven't gone over well with those who support gun rights.

The remarks were filled with a variety of falsehoods and half-truths ranging from comparing the Second Amendment to the long-debunked "shouting fire" strawman argument on the First Amendment, the "gun show loophole" myth, arguing the firearms industry cannot be sued for liability, the effectiveness of the 1994 "assault weapon" ban, and that Americans could never own certain types of guns.

Among his planned actions are what would effectively ban stabilizing braces for pistols, placing them under NFA regulation, outlawing the common use of so-called "80 percent" firearms and receivers without going through an FFL for the added costs and red tape of a background check, pushing states to implement controversial and adversarial gun seizure order laws that typically do not allow for Constitutionally-protected due process; and install a new ATF (which Biden referred to repeatedly as "AFT") director pulled directly from the staff of a national anti-gun group.

The reaction from conservative lawmakers and pro-2A groups across the spectrum to such planned – and initial – moves by the Biden-Harris admin against gun rights was strong.

The right to keep and bear arms is fundamental for preserving our liberty.

The answer is not to restrict the Second Amendment rights of law-abiding citizens, the answer is to go after violent criminals and come down on them like a ton of bricks.

“The Second Amendment is a foundational part of our country and key to protecting our freedoms. Diminishing the ability of law-abiding citizens to exercise that right won’t make our streets safer, but it could put good people in harm’s way. President Biden is overstepping his legal authority and undermining the Constitution, taking action which will encourage states to enact extreme gun control legislation and limit the ways people can protect themselves and their families. The administration should consider enforcing the laws we already have in place and focus on mental health efforts to address the root cause of violence, not unilaterally weaponizing the federal government to infringe upon the American people’s fundamental rights.”

From the National Shooting Sports Foundation, the trade group of the American firearms industry, which spans from publicly traded gun makers to mom-and-pop local gun stores:

The President’s nomination of David Chipman to lead the ATF is overt politicization of the bureau that regulates the firearm industry. This is putting the fox in charge of guarding the hen house. Mr. Chipman was a registered lobbyist for the gun control group Everytown, before joining Giffords gun control in 2019. The idea of a gun control front man leading the agency to regulate firearms is unacceptable. Gun control groups would have howled if President Trump nominated someone from the firearm industry to run the ATF during his term in office.

This is a troubling reversal of years of proactive safety cooperation between ATF and the firearm community. The men and women of ATF have a difficult enough mission, they deserve a leader without a political agenda.

The president never mentioned combating criminal misuse of firearms or holding criminals accountable for their crimes. He only spoke of ways he could take away the God-given rights of those who obey the law.

Let's be clear as we're watching this Biden circus.

Biden is dismantling the 2nd Amendment.

It's time to STAND and FIGHT!

In a time when Americans have clearly spoken with their wallets, setting monthly record after record of new firearms sold, this move is a brazen and shameless attempt to redline the right to bear arms. And while these new edicts will come directly from the executive branch, Biden is joined in his despotic campaign by the likes of House Speaker Nancy Pelosi, Sen. Diane Feinstein, and other autocratic elites.

Joe Biden just bypassed Congress to attack your Second Amendment rights! Biden is targeting homemade and pistol-braced firearms. And he is calling on Congress and states to enact Red Flag gun confiscation orders.

Like a dictator, Biden is seeking to unilaterally regulate firearms that gun owners currently own. And he’s doing this via executive action—bypassing the constitutional requirements which give Congress the authority to pass legislation.

"THE PRESIDENT HAS ESSENTIALLY RAISED THE BLACK FLAG, AND WE SEE NOTHING POSITIVE FOR AMERICAN GUN OWNERS OR THE FIREARMS INDUSTRY.” – SECOND AMENDMENT FOUNDATION

From the Second Amendment Foundation:

“Nobody from the Biden administration has reached out to us or any other rights organization to my knowledge, which certainly clarifies Biden’s approach to firearms regulation,” said SAF founder and Executive Vice President Alan M. Gottlieb. “He came into office talking about unity, but he just declared war on tens of millions of law-abiding gun owners who have committed no crimes.”

Biden’s nomination of David Chipman to head the Bureau of Alcohol, Tobacco, Firearms and Explosives is another alarming development, Gottlieb said. The nomination requires Senate confirmation.

“Joe Biden just nominated a man now working for the Giffords gun control lobbying group to head the agency responsible for gun law enforcement,” Gottlieb observed. “That’s not just a bad signal to gun owners. The president has essentially raised the black flag, and we see nothing positive for American gun owners or the firearms industry.”

From the Liberal Gun Club:

Amend the NFA if you want to amend the NFA. Arbitrarily turning millions of legal gun owners into felons seems like a really good way to spend a lot of time in court. Either that or a whole bunch of people get “free SBR tax stamps.”

We can’t see either solution surviving a court challenge.

From the Pink Pistols:

While our members are free to believe what they wish, Operation Blazing Sword - Pink Pistols finds gun control to be historically rooted in racism and to disproportionately affect those who need protection the most: minority populations, be they racial, gender, sexual, ethnic, or religious minorities.

Furthermore, attaching the words 'common sense' to gun bans does not make them any more palatable, and we consider them just as offensive, and just as unconstitutional, as bans on same-sex marriage. Operation Blazing Sword - Pink Pistols supports gun rights and queer rights, not specific political narratives.

Notably, Biden's announcement came on Holocaust Remembrance Day, and Jews for the Preservation of Firearms Ownership weighed in on gun control and its effect on state-sponsored violence.

Genocide is a tool basically of governments, but also of societies and religions, that must never be sanctioned, endorsed, tolerated or endured with a blind eye as it is, even now, in dark corners of the world. Muslims, Christians, Jews, Buddhists and other swaths of society, hated with intensity are the targets of the atrocity. The haters believe they are right, even approved, and proceed with glee.

Jews for the Preservation of Firearms Ownership, jpfo.org, understands there is no one you can reach out to when you are the target of organized slaughter and enslavement, which is why we endorse and teach individual responsibility and an armed public. History unequivocally shows that only a balance of power maintains freedom, and on this, Holocaust Remembrance Day, we ask again, could Germany have slaughtered six million Jews if they had all been armed and trained? We answer our own question: No! And we repeat our battle cry: Never Again!

Speaking of dates, the Biden-Harris administration’s "wag the dog" breakfast show on gun control as a public health emergency coincided with the release by U.S. Customs and Border Patrol of record numbers of persons attempting entry along the Southwest border, a crisis Biden has been cratering on with the public according to polls.