The verdict speaks for itself, but what differing sides on the right to keep and bear arms take from it is striking.

In the aftermath of the jury acquittal of 18-year-old Kyle Rittenhouse – who was found not guilty on Friday in of a slate of homicide and weapons charges from an August 2020 defensive gun use in Kenosha, Wisconsin – anti-gun groups quickly mobilized to beat the drum of disarmament.

"Kyle Rittenhouse’s not guilty verdict should terrify all Americans," said Po Murray, the chairwoman of Newtown Action Alliance. "We call on Congress to immediately ban assault weapons and open carry to protect Americans from political violence."

Similar statements came from about every national gun control organization, with Giffords echoing the call for more gun restrictions on a national level.

"As the tragic events on that night in August showed, a 17-year-old arming himself with an AR-15 makes no one safer," said the group in a statement attributed to its executive directors. "Rather than roll back gun safety laws, as the gun lobby is pushing the Supreme Court to do, we must strengthen gun laws that protect us all. Laws like minimum age requirements and assault weapon regulations don’t infringe on the Second Amendment – they’re commonsense protections. At the same time, extreme Stand Your Ground laws that encourage people to shoot first and ask questions later must be repealed." 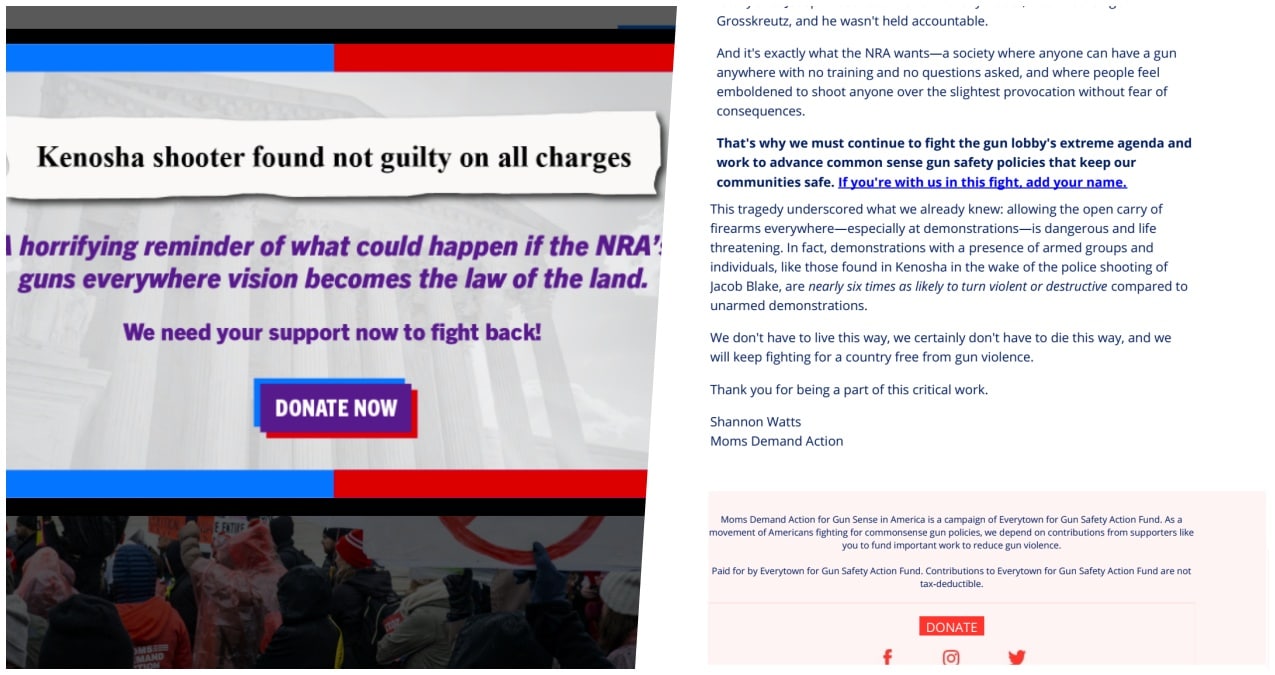 Shannon Watts, founder of the now Bloomberg co-opted Moms Demand Action, even looped in the NRA for good measure.

"This is the society that the NRA wants, one where anyone can have a gun anywhere with no questions asked, and where people feel emboldened to shoot anyone over the slightest provocation without question or fear of consequences," said Watts. "We don’t have to live this way, we certainly don’t have to die this way, and we will keep fighting for a country free from gun violence."

At the same time, the editorial board of USA Today shrugged off the jury's verdict, but vilified Rittenhouse's AR-15 in a speculative opinion piece titled, "Kyle Rittenhouse was acquitted, but the assault-style rifles are (once again) guilty in deadly shooting." This came even though rifles of all sorts accounted for 364 of 13,927 homicides – less than 3 percent – tracked by weapon in the FBI's 2019 statistics, a figure easily bested by blunt objects, knives, and personal weapons such as hands and feet.

Of note, USA Today has repeatedly been called out for partnering with The Trace, the Bloomberg anti-gun advocacy outfit, for newsroom content.

Meanwhile, Dems in Congress who have benefited from the prior endorsement of gun control organizations called for possible federal charges against Rittenhouse.

Nadler, 74, is in his 15th term in Congress and currently serves as chair of the House Judiciary Committee. He has repeatedly received the strong endorsement of Everytown and Giffords. In backing Nadler for reelection, the Brady Campaigned pointed to his past support for bills they backed on gun seizure, "assault weapon" bans, and expanded background checks.

Another congressman from New York, Sean Patrick Malony, chair of the Democratic Congressional Campaign Committee, issued a statement on the Rittenhouse acquittal that was so error-ridden that it required a follow-up correction. Malony, who supports bans on popular semi-automatic rifles, in 2019 said, "I’d like to live in a country where we viewed an AR-15 the same way we view a machine gun - as weapons of war that don’t belong on our streets."

Like Nadler, Malony has consistently been embraced by anti-gun groups.

While anti-gun organizations and politicians spent the weekend wringing their hands and shaking the donation cup, groups seeking to protect the right to keep and bear arms pointed to the judicial outcome in Kenosha as vindication.

"The verdict by the Kenosha jury is an affirmation that people, regardless of their age, have a right to defend themselves against violent attack, by individuals or a mob," Alan Gottlieb, founder of the Second Amendment Foundation, told Guns.com. "There is no doubt this case will be analyzed and debated for months, or even years. What the verdict demonstrates is that reasonable people sitting in judgment of a case that should never have been brought in the first place can see through a politically-motivated prosecution and reach a verdict that is both reasonable and just."

"Consistent with the Constitution, in finding him not guilty on all charges, a jury of Kyle Rittenhouse’s peers recognized today that the human right to armed self-defense doesn’t end at a state line and applies equally to young adults. Individuals facing a threat of violence have no duty to retreat before exercising their right to defend their life. And after weighing the evidence, the jury found that Mr. Rittenhouse should not be convicted on charges the prosecution should never have brought in the first place. While Kyle is no longer under threat of being caged for defending his life, his experience shows the value of our fundamental, individual right to keep and bear arms: When the police aren’t willing or able to protect you from unjust force and violence, your AR-15—America’s rifle—can."

Finally, Gun Owners of America has pledged to give Rittenhouse a new AR-15 as thanks, "for being a warrior for gun owners and self-defense rights across the country." 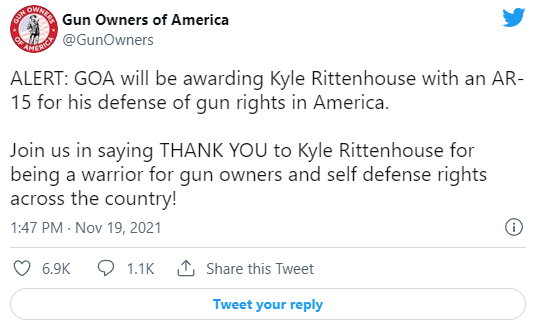