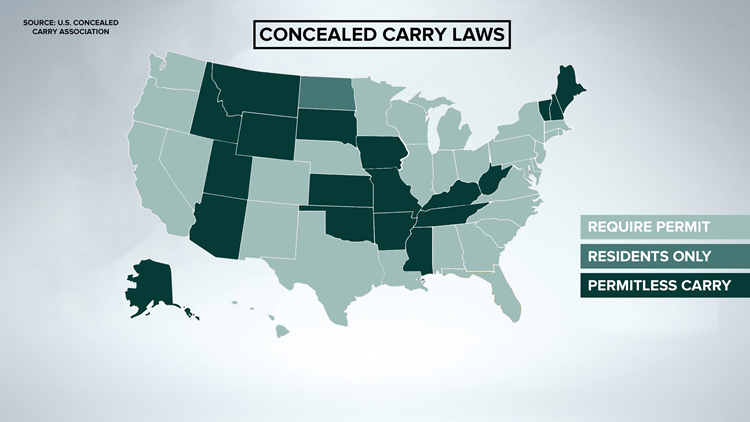 Laws that recognize the right to carry a concealed firearm without a permit could soon be a reality in several states where it is on the agenda. Currently, at least 21 states have similar laws on the books.

Despite opposition from the powerful Alabama Sheriff’s Association-- whose members stand to lose revenue if fewer people pay for concealed carry permits at their local sheriff's office-- the Alabama Senate Judiciary Committee on Wednesday passed SB 1 in a 6-4 vote. The legislation would eliminate Alabama’s permit requirement for carrying a concealed handgun in public. The Committee is also in the process of hearing public testimony on SB 12, another permitless carry bill.

The Georgia Senate Judiciary Committee on Tuesday approved a permitless carry measure, SB 319, in a party-line 6-3 vote. The proposal is sponsored by Sen. Jason Anavitarte, R-Dallas, who contends the time in right for such a move.

"The requirement to have a permit does not deter the criminal. They’re going to carry one anyway,” said Anavitarte. “This bill puts law-abiding gun owners on an even playing field with criminals."

Georgia Gov. Bryan Kemp, a Republican amid a reelection bid, has promised to sign a constitutional carry bill if one reaches his desk this session.

Meanwhile, in the Hoosier State, lawmakers in both the Indiana House and Senate are working on bills geared towards constitutional carry. One, HB 1077, passed the lower chamber last month and has been referred to the Senate, where a gun rights group are concerned that it may languish after a four-hour hearing on the practice failed to see progress.

"As lawmakers, we need to do what's necessary to protect our Second Amendment rights,” said bill sponsor, state Rep. Ben Smaltz, R-Auburn. "That means getting this legislation across the finish line. It's my hope the Senate considers and acts on this important bill this session."

Lawmakers in Ohio late last year passed separate versions of permitless carry legislation-- SB 215 and HB 227-- seemingly a slam dunk for the practice. However, the bills are still resting in the General Assembly and haven't been sent to the governor.

Ohio Gov. Mike DeWine, who during his 2018 GOP primary reportedly committed to a state gun rights group that he would sign a constitutional carry bill, has been evasive on the measures this session.

In early January, state Sen. Tom Brewer, R-Gordon, introduced a permitless carry measure, Legislative Bill 773. The proposal had a lengthy public hearing before the Senate Judiciary Committee on Jan. 20 that included testimony by Dr. John Lott, a well-known criminologist in 2A circles. Lott addressed the fact that permit costs in the Cornhusker State are among the highest in the nation.

"Right now, it's $100 for a permit in Nebraska that's twice the national average for cost for permits," said Lott. "Plus, if you include the training cost, you're talking about something that's at least $170 or so. That may not stop you or I from being able to go in and have a permit. But the very people that my research indicates who benefit the most from being able to go and have a gun for protection, poor minorities who live in high crime urban areas. One hundred and seventy dollars might make the difference between whether or not they can legally carry or not."