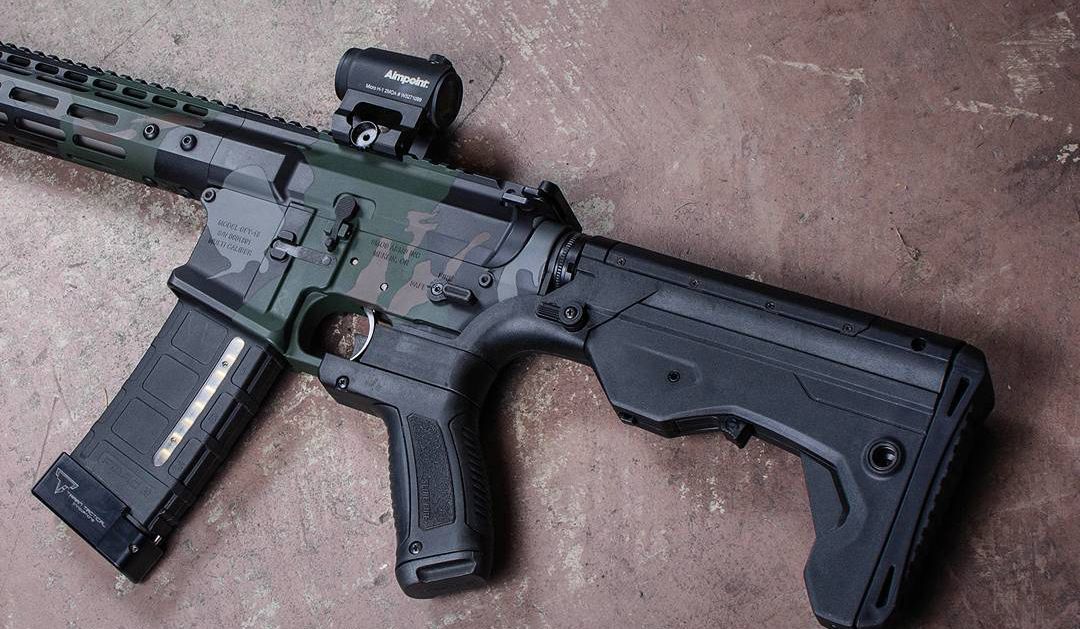 The NMCCA, from their bench at the Washington Navy Yard, partially set aside and dismissed a general court-martial's conviction of a Marine who was found with a bump stock in his personal vehicle while trying to enter an Air Force base in Nebraska. The Marine, in his appeal, argued the bump stock did not change the mechanics of the rifle it was attached to, with the gun still firing only one round per single pull of the trigger. The panel, agreed, holding that the ATF's 2018 rule change that bump stocks are machine guns under the National Firearms Act is a stretch.

"[U]ntil Congress changes the law, a bump stock like the one possessed by Appellant on a semiautomatic rifle is not a machine gun under the statutory definition," said the presiding senior judge in the ruling, Marine Lt. Col. John J. Stephens. The two Navy judges on the panel, Cmdr. Christopher J. Deerwester, and Capt. Robert P. Monahan, concurred.

The panel heard from a retired Marine gunner – a position held by experts on weapons in the Marine Corps – who testified about the technique of bump stock firing a semiautomatic rifle. From the court documents:

A shooter pulls the trigger, keeping his trigger finger rigid against it, holds the rifle stationary, and applies forward pressure with his non-firing hand. This causes the rifle’s recoil energy to continue the rifle’s firing mechanism of firing, extracting, chambering, and firing more rounds. A bump stock facilitates this by allowing the stock to slide, while the shooter keeps his trigger finger applied to the trigger and presses forward on the upper receiver. When asked if the “trigger is actually moving back and forth” during bump firing, Gunner Whiskey answered, “And the shooter cannot feel that, but yes, you’re absolutely right.” When asked if “the trigger needs to move back and forth between each and every round?” he replied, “It does.”

While the Marine who possessed the bump stock had that charge dismissed, he is still on the hook for 24 months’ confinement, total forfeiture of pay, reduction to the rank of E-1, and a bad-conduct discharge over other charges under the Uniform Code of Military Justice that he was found guilty of including fraudulent enlistment and possession of two unregistered full-auto pistol switches.

ECHOES IN OTHER CASES

What the case means for the bump stock ban is narrow, as the NMCCA only has jurisdiction over Navy and Marine courts and the legal precedent does not carry over to other courts. However, it can be cited in arguments on cases that tread the same ground.

The ruling is the second time this year that a federal court system has found that the ATF may have gone too far in their bump stock rule change. In March, a three-judge panel of the U.S. Sixth Circuit Court of Appeals held that the ATF – part of the executive branch of government – enforces laws rather than makes them, with that authority reserved for the people acting through their elected representatives in Congress.

"Congress could amend the statute tomorrow to criminalize bump-stock ownership, if it so wished," said Judge Alice M. Batchelder in the 6th Circuit's March ruling. "But as judges, we cannot amend [the statute]. And neither can ATF. This is because the separation of powers requires that any legislation pass through the legislature, no matter how well-intentioned or widely supported the policy might be."

Similarly, the ATF is moving to redefine most pistols with stabilizing braces attached as NFA-defined short-barreled rifles, and multi-part receivers and so-called “80-percent” frames and receivers as firearms through rulemakings that do not involve Congress.