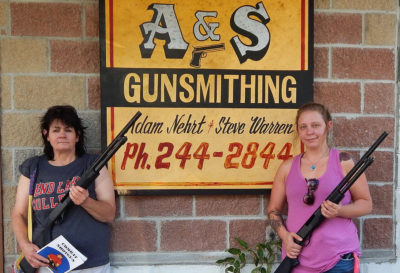 A man in Illinois is looking to find 50 neighbors who pass his “babysitter test” and buy them each a shotgun. The test? Have a state gun license and be a woman.

The man, Robert Bertrand, says he’s already found five women who’ve passed his test and he’s looking for help arming more. He’s got a website set up for people looking for information and for others to donate to the cause.

“I am a father, a husband, and a Navy veteran,” he said. “Based on mountains of research and an overwhelming consensus of law enforcement officers, military vets, and crime experts we believe the best way to help women is by empowering them to exercise their rights.”

“I now seek to help the women in Southern Illinois who are most vulnerable of becoming victims of violent crime,” he continued. “With your help I will assist 50 women in attaining 50 shotguns.”

“The amount of work that I have put into this project has been worth it,” said Bertrand on the Help 50 website. “I could quit today satisfied that I helped two women become a little safer. The truth is there is a lot more work to be done and to do that work I need to raise more money.

“With every donation I get a step closer to my goal of arming and training 50 women here in Southern Illinois,” he added. “Every dollar counts and I am making the most of it.”

“Especially in Mt. Vernon, some areas are kind of rough,” he added. “A lot of people are worried about burglars in the middle of the night.”

The two organizations are raising money by getting referrals for t-shirt and accessory sales through Amazon.

Bertrand said he’s focused on arming women because, “I’m not giving them to guys, because they always ask for guns,” he said. In addition to giving away guns, Bertrand is arranging training for the women through NRA-certified classes.

According to Bertrand, he has about 30 more women interested in the deal. He’s looking to buy each one a 20-gauge H&R Pardner Pump Compact, which is an entry-level pump shotgun built for smaller-framed shooters.