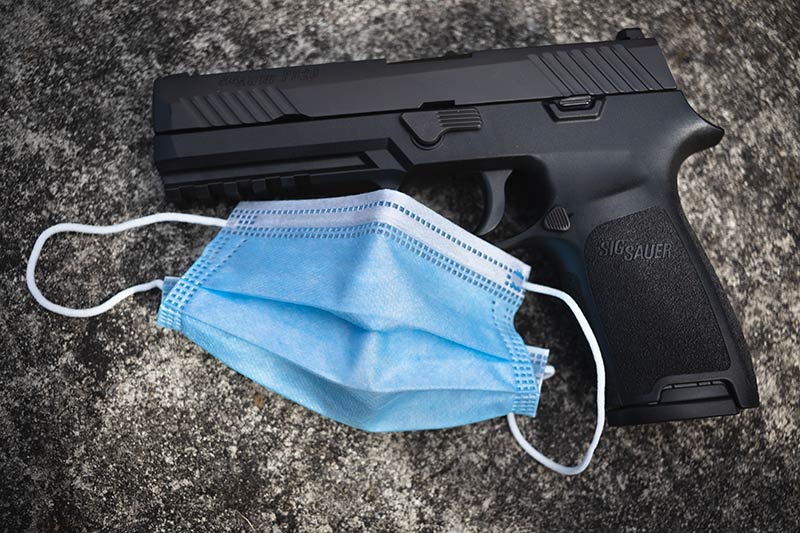 Sometimes a pandemic pushes you in a direction you didn’t expect. Read on to find out how. (Photo: Jacki Billings/Guns.com)

With the National Shooting Sports Foundation reporting millions of new gun owners flooding gun stores to make their first buys, I wanted some perspective on what would make a former gun control activist suddenly pro-2A. I headed to Instagram, asking my followers to help me track down new gun owners who might be willing to talk. Later that day, I received the following email from a reader who wished to remain anonymous.

The letter has been edited for conciseness and clarity, but, at its core, begs the question: left or right, what would you do to protect your family amid a crisis?

I saw your prompt on Instagram and I thought I’d write in a perspective that might be unique.

I grew up in New York, about 40 minutes away from New York City, as a second-generation Korean American in a largely white community. As you are likely well-aware, New York has some of the most restrictive laws against firearm ownership, and no one I knew personally owned guns or shotguns. I had a neighbor who would shoot off guns sometimes on his property, probably for plinking, and the sound was enough for me to run inside and stay clear of his property as a child.

That being said, while growing up, I remember developing an interest in firearms and learned how pistols/bolt-action rifles worked. They were marvels of engineering, and I had a curiosity to learn more. I remember signing up for some gun magazine and receiving it in the mail. My parents reacted very poorly to the sight of a magazine with a gun on the cover. This was maybe four years after Columbine had taken place, so I think I can understand the gut reaction. Thus, despite my curiosity, I think the way my parents reacted and the environment I was brought up in, trained me to suppress any interest in guns for fear of being labeled a threat.

I was in college when the Virginia Tech shooting happened, and I watched the news in horror as someone who looked like me was committing atrocious acts right on TV. I was so angry and ashamed that an Asian person could act that way, and, because of that, I railed against the idea of anyone having guns and signed some petitions for stronger gun control laws. After all, we had strict gun laws where I grew up, and I hadn’t heard of a single mass shooting in New York. Hidden within my actions, however, I think there was still that underlying desire to not be labeled a threat because I felt that looking different from the majority and being compared to that monster was a very dangerous position to be in.

My first time shooting an actual gun was when I was in graduate school in Maryland. It was for my birthday, and I was on a journey of trying things I had never tried before… It seemed that mass shootings and school shootings were occurring with increasing frequency, and I was positive that I was correct that we needed to do something to limit the availability of guns in America. I felt emboldened that the media and seemingly everyone I hung out with felt the same way. I marched with Everytown’s March for Our Lives. I proudly voted for political candidates who were anti-gun.

This changed when COVID-19 hit. I felt the charged looks and the wide berth that people were giving me when I wore a mask before our governor said it was required. I would have understood that and chalked it up to ignorance, but then there were thousands of reports of discrimination, some violent, against Asians throughout the United States. I thought about how easily I could become a victim of one of these incidents and how I could make it home to my beautiful newborn baby boy and my wife if I were attacked. I concluded that one of the most effective ways was a force multiplier, like a gun.

I started researching how to buy a gun, how to safely store a gun, what kind of gun to get, which caliber, and more. It was while researching this that I learned about what the point of the Second Amendment was. I never learned this in school…I learned about Supreme Court cases like Warren vs. DC or Castle Rock vs. Gonzales, which decided that police have no duty to protect the public. I learned about how some gun stats were misleading in the way that groups like Everytown had presented them. All this reinforced the concept that no one is responsible for the safety of yourself and your loved ones, but you.

Once I was somewhat sure of what I wanted, a [Sig Sauer] P320 full-size in 9mm, I brought my findings to my wife, who was, and still is, anti-gun. I made clear why I felt we needed one and what steps I would take to make sure that the gun would be out of reach from our son. It felt like what swayed her the most in coming to terms with a gun being in the house was the fact that I took so much time to research and how much I thought about safety. That, along with the argument that if things ever got really bad, did we really want to be without one?

Thus, with my wife’s blessing, I bought the gun from Guns.com and picked it up at a local FFL, fully realizing that I was at the beginning of a journey. The P320 I got was for home defense, I had no delusions that it was going to be something that I could comfortably carry for personal protection… I am okay with not being able to carry a weapon concealed right now as I am still working from home, but what happens when this is over?

I think this is a long-winded way of saying – yes, I am a hypocrite. In wanting to fit in and not call attention to myself, I advocated against guns and the people who own them, and in doing so, I realize that I helped make myself and those I advocated against defenseless. With the laws and conditions in this country being what they are, how can I vote for someone that would take away or severely limit the most effective tool for individuals to protect themselves?”