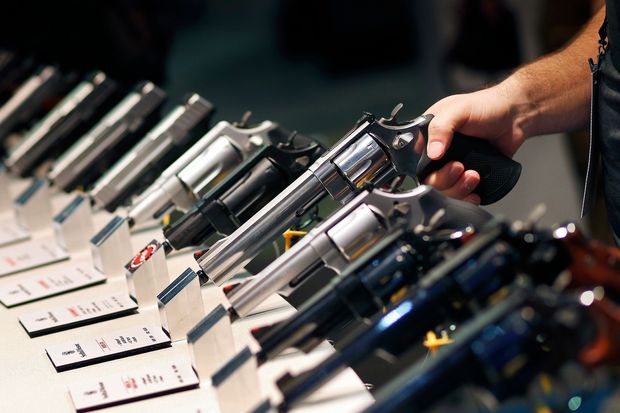 The legislation would mandate background checks on almost all gun sales, both commercial and private, with just narrow exemptions. That would ensure that background checks would also be required for private sales online and at gun shows. Currently, federal laws require the checks only for sales by federally licensed dealers, though some states have added their own requirements.

The measure, which is expected to have some Republican support, is likely to pass the House during the Democrats’ first 100 days in control, but is expected to stall in the GOP-led Senate. More than 40 Democrats introduced similar background-check legislation in the Senate Tuesday. But after decades of little action under both Republicans and Democrats, proponents of tighter gun laws said passage in even one chamber would mark political progress on an issue that flares up frequently after mass shootings.

The legislation’s introduction fell on the eighth anniversary of the day Gabby Giffords was shot in the head in Tucson, Ariz. PHOTO: JOHN MINCHILLO/ASSOCIATED PRESS

“We have not seen any kind of major gun-safety legislation pass either chamber” in recent years, said Robin Lloyd, director of government affairs at Giffords, the gun-violence prevention group founded by Ms. Giffords. “It’s certainly a harder, uphill climb in the Senate,” Ms. Lloyd said, but a bipartisan vote in the House would “put pressure on the Senate and the White House to think about what they’re doing in response.”

The bill’s introduction fell on the eighth anniversary of the day Ms. Giffords was shot in the head outside a Safeway in Tucson, Ariz.

“Today is also a day of action,” Mrs. Pelosi said as Democrats prepared to formally introduce the bill. “We say enough is enough by finally bringing common-sense bipartisan background-check legislation to the floor of the House.”

Less than a week after Democrats took control of the House, the timing also highlights how high they plan to prioritize reducing gun violence as the 2020 presidential primary heats up. In the 2018 midterms, gun control became a litmus test for Democrats, a shift from years past when many in tight races emphasized their support for gun rights.

“To me it doesn’t violate anyone’s rights and it puts in very basic protections,” Mr. King said. But he said for many Republicans, critics of tighter gun laws are a stronger political force. “Those who are opposed to it are much more intense and much more likely to vote on that as their main issue,” he said.

“This legislation does nothing to prevent gun violence, yet threatens the constitutional rights of law-abiding citizens,” said Rep. Richard Hudson (R., N.C.), who has previously introduced legislation enabling gun owners who legally carry concealed firearms in one state to carry them in others.

The National Rifle Association said it expects to oppose the House bill, noting that there already is a background-checks system in place.

“So-called universal background checks will never be universal because criminals do not comply with the law,” NRA spokeswoman Jennifer Baker said in a statement. “Instead of looking for effective solutions that will deal with root cause of violent crime and save lives, antigun politicians would rather score political points and push ineffective legislation that doesn’t stop criminals from committing crimes.”

The timing of the legislation highlights how Democrats plan to prioritize reducing gun violence as the 2020 presidential primary heats up. PHOTO: CHIP SOMODEVILLA/GETTY IMAGES

Congress has made only incremental changes to the country’s gun laws in recent years. After the shooting of 20 children and six adults at an elementary school in Newtown, Conn., a bill to expand background checks to all online sales and sales at gun shows narrowly failed in the Senate in 2013.

Bipartisan groups of lawmakers have also pushed to prevent suspected terrorists from buying firearms by prohibiting individuals on the government’s “no fly” list, but a series of proposals all came up short in 2016, following the shooting at the Pulse nightclub in Orlando, Fla.

In March, Congress did tuck a provision in a spending bill signed by President Trump to strengthen compliance with the national background check system for buying firearms. The measure added incentives for states and federal agencies, including the military, to submit criminal-conviction records to the National Instant Criminal Background Check System, or NICS. Federal law requires agencies to submit relevant records, but at the state level, compliance is voluntary unless mandated by state law or federal funding requirements.

Corrections & Amplifications
The National Rifle Association didn’t support a full ban on bump stocks, although it did support reviewing their classification. An earlier version of this article incorrectly said the NRA supported the Trump administration’s sales ban on bump stocks. (Jan. 8)